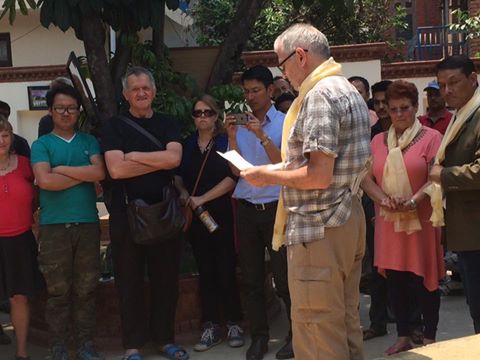 The earthquake that shook Nepal

An art exhibitioin by Hari Nepali

Hari walked the streets as the dust of the earthquake was still settling, he looked at the ruins at Swayambhunath, Boudhanath, Kathmandu, Patan and Bhaktapur…. and in the weeks that followed he painted: The devastation.

From memory, he also painted each motive as they had once been.

His work, before and after, was not one of despair, but a touching memorial to those who suffered and to those who died.

The opening ceremony candles were lit by Mrs Bhagarati Shrestha who had lost her daughter, Shreejana in the earthquake.  A stipend to sponsor a child is established in her memeory.  Family and friends attended the ‘candle’ ceremony.

All income generously donated by Hari to Mountain People.